A bit emotional, and an update!

I feel really emotional today, in both good and sad ways.

There are so many goodbyes right now (or I prefer to say; “See you soon, again!”, instead). I hate it. There are people who have been so important to me the past years, and mostly the last year. Who have saved my life, supported me, and been the strength when I have needed it. Who have believed in me, and that this move to the States IS gonna be something positive and good for me. Some have wondered how it is gonna be there, and if I will have any professional support. So I’m thinking of giving you an update about that (not in too much detail though)…

I was signed out from the hospital in the end of May and have been 100% home since then, but of course connected to the eating disorder clinic where I have still been seeing my therapists. I’m also part of an eating training group during the summer, which feels good. I’m feeling waaaaay better than I did just a month ago, but it’s still a lot to work on, to process, and to face. Not that an eating disorder is only really connected with being underweight (only Anorexia Nervosa is, and that’s just one diagnosis among several other eating disorders!!! Really important to think about since you can’t tell that the majority of the ones with an eating disorder, have an eating disorder by looking at their body). Anyway, I’m back to normal weight after a really tough period and I have a really hard time finding it ok…BUT to able to live life, attend dinners with friends and family, have more energy, be more happy is so much more important to me. I want to live life, and you don’t when you starve yourself and have no strength, no social life, can’t sleep, find it really hard to eat, can’t talk properly, can’t think and so on. It’s not fun at all. And I get so upset over all the commercials, all the (mostly) young people who get stuck in this. It’s so freaking crappy down in that dungeon.

So in other words, I’m still fighting really hard. Every day. But I haven’t lived like I am now in many years. Haven’t been this true to myself in many years, and Liz has seen sides of me she’s never ever seen before (in a positive way). We have so much more fun now, and I’m so thankful for having her by my side. With all this happiness in my life, I know it’s important to find a balance in the middle of that as well. It’s hard, but even though I’m doing things now, I haven’t done earlier in this way (actually enjoying eating out), things need to move slowly so it doesn’t turn totally upside down and end with back-steps.

I saw my therapist today for almost the last time. She’s gonna have vacation now for some weeks, and once she’s back, it’s only a few more days for me in Sweden until I move to the States. GAAAAAH (exitement!). I will continue with some other treatments while she’s gone though.

I’m also saying goodbye to our apartment in the next week. We are gonna stay at my parents’ for some weeks before we move. It’s hard to leave it still, although three is a lot of sickness within the walls; but it’s gonna be amazing to move to our dream apartment, and decorate it with new, old, and cool stuff.

So, as a summery. It’s going pretty good for me, and I’m feeling pretty ok!!! So I’m thinking about pretty much leaving this subject now, and not writing about it anymore. Well, perhaps a final post in some weeks, when I’ve said goodbye to all the professionals. Other than that, it’s goodbye to that, and hey healthy future instead!

Do something today that your future self will thank you for. 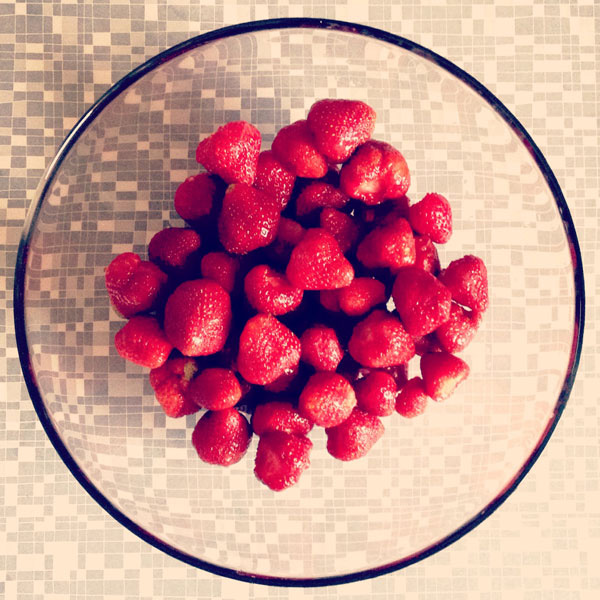 Yummy strawberries we ate the other night. Love that the strawberry season is here!