I have had a website or a blog for ten years as of 2014! So I was thinking of looking back at some of the designs I had then..and some years ahead.

I was coding everything from scratch and used one of my good friend’s server to upload the website. My hostname was free (.tk), and my nickname on the Internet back then was, Cuerda which means rope/string in Spanish. But the Swedish name Lina also means rope or string in Swedish. Got it? A little bit too long of a stretch, but whatever. I liked it. I moved to Uppsala in fall of 2004, studied music at the University, shared an apartment with a friend, sang in a choir every week, spent all my time at school – did music stuff, and/or hung out with friends. The year after, 2005, I worked in Uppsala and shared a tiny, tiny student room in a dorm with another friend. Good times and good memories.

I moved to a tiny tiny town, called Mariannelund, located in the county Småland in Sweden, and studied Social Work at a boarding school there. Since I wasn’t in Uppsala anymore, my friend (who had the server I used) and I didn’t have those geeky coding sessions together when we worked on our computer stuff, so I moved over to nogg.se instead. I still used my nickname Cuerda, and you can actually still find and read my blog. Check it out → here. It wasn’t that much to do with the design there, more than the color schemes, the profile picture, and the background. I used this blog between August 2006 and December 2008. I met Liz in the summer of 2007, and had left the boarding school to study Social Work as my major at the Mid Sweden University. 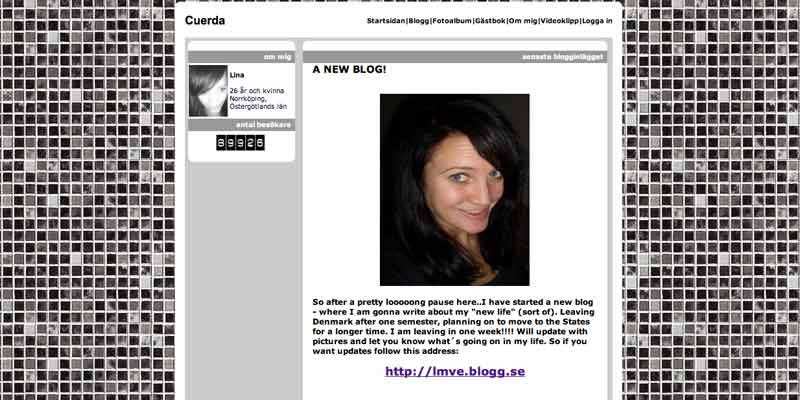 I missed designing websites, so I started a blog account on blogg.se and chose to leave my old nickname Cuerda. I now called my blogg lmve which stood for the first letters in all my names. You can actually still find this old blog → here. I did an internship in Denmark and started going back and forth to the States quite a lot. Liz and I were, and are, so in love. It was during this blog major changes happened toward the end. I participated in a → blog competition in my hometown, and won! You can read about my winning post (in Swedish since I had to write in Swedish for the competition) → here, and → here (when I found out that I had won – in English). Anyway, I won my own domain name, space on the Internet, and a private website/blog workshop. Therefore, I changed from lmve.blogg.se to lier.se where I am now. Lier is based on the first two letters in my first and last name – Lina Eriksson. It’s also what I’m using all over the Internet as my nickname whenever it’s possible. See links at the end of this post. 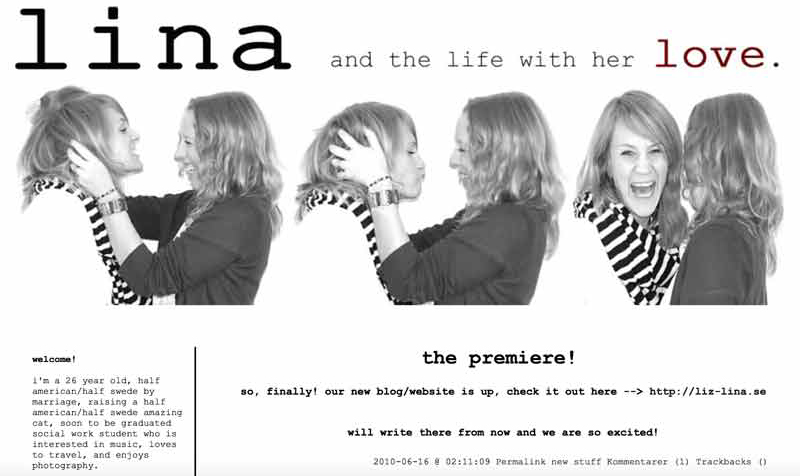 We didn’t keep our first page with links to our separate blogs for a long time…can’t recall the reason why we stopped. I changed to use only lier.se and that’s where we are now. I’ve had a few blog designs since 2011, and the ones below are just a few of them.

Since I started the University here in Asheville, North Carolina USA and studied New Media with a concentration in Interactive Media and Web Art/Design, I’ve also added a portfolio to my website, and therefore it has a first page where you then click to either my blog and portfolio etc. As I’m writing this, my website looks like this. 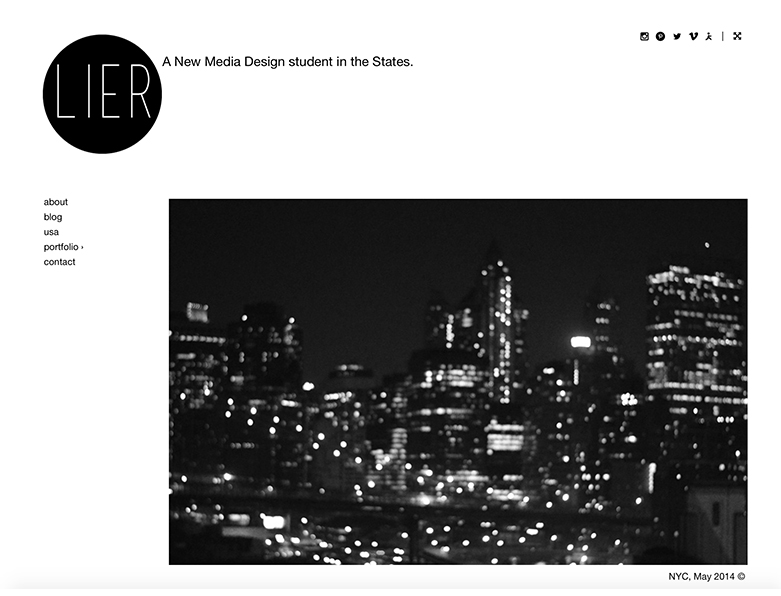 My blog looks like this (as you can see..hehe) 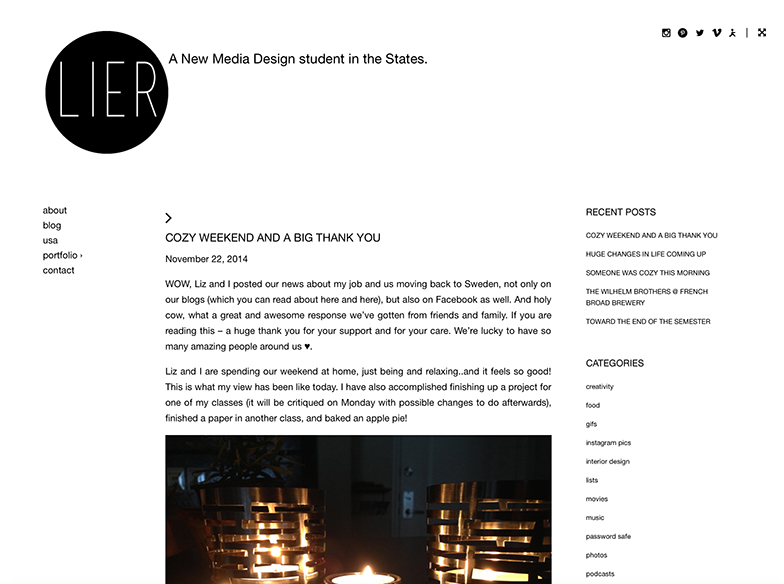 Can’t believe it’s been ten years now..if you would like to follow me on other places as well, you can find me here ↓

Since I’m soon not gonna be a student anymore, I’m planning on releasing a new design within the next weeks – still the same address. Just a little tease 🙂